The City of Adair Village operates with a four-member elected City Council, plus a Mayor. This body of elected officials oversees the policy decisions of all municipal operations. It also provides direction and oversight to the City Administrator, Pat Hare, who manages daily operations.

The City Administrator, Finance Clerk, and Utility Clerk provide city services at City Hall, 6030 NE William R Carr Avenue. The City’s Public Works Department manages the water, sewer, street, and park operations and maintenance. This includes the City Park located in the center of the original neighborhoods. The City also has a part-time Recreation Coordinator that facilitates the Adair Village Summer Youth Program as well as the Teen Program.

As of the 2010 census, the population of Adair Village was 840 people. It is largely a bedroom community due to its close proximity to Corvallis, Monmouth, Albany, and Independence. Centrally located in the Mid-Willamette Valley, it is an easy commute to any one of the universities or community colleges located in the surrounding communities.

The City of Adair Village was incorporated in 1976, at a location rich in military history. It occupies acreage that once supported two military bases, one Army and one Air Force. In early 1941, the War Department was looking for a place to build a new training facility, or cantonment. The cantonment required at least 50,000 acres of land, a good water supply, decent electrical power, and railroad access. The land in the Adair area was ideal and was chosen in September 1941. To make way for the new construction, many families had to give up their homes. The government purchased farms, rerouted railroad tracks and roads, and completely wiped out the small town of Wells, Oregon, including an elementary school. Even cemeteries located within the camp boundaries had to be relocated. A total of 414 grave markers, some dating back to the 1850’s, were relocated. Construction began in spring of 1942, and by winter the camp was in use. The Army built 1,700 buildings including barracks, machine shops, stores, dining halls, theaters, a post office, hospitals, and chapels. Camp Adair was officially dedicated in September, 1943.

Camp Adair was named for Henry Rodney Adair. He was a native of Astoria, Oregon and a member of a prominent Oregon pioneer family. After graduating from West Point, he became a cavalry lieutenant. He was killed during the Pancho Villa Expedition at the Battle of Carrizal on June 21, 1916. 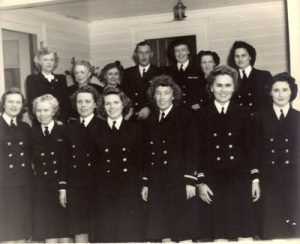 The main purpose of the Camp Adair cantonment during World War II was to train Army troops who were destined to fight overseas. Four divisions trained at Camp Adair, two of which fought in Europe. One fought in North Africa and Europe, and one in the South Pacific. At one time 30,000 to 45,000 soldiers and civilian employees lived and worked at Camp Adair, making it Oregon’s second largest city during WWII.

For a short while, part of the Camp served as a prisoner-of-war (POW) camp. The POW camp housed German and Italian prisoners. This was not well publicized information, and most residents in Benton and Polk counties were unaware of the POW facility. Beginning in 1946, the former hospital buildings of Camp Adair served as faculty and student housing to accommodate the growth at the Oregon State College, now Oregon State University, much of which was brought on by the returning GIs.

Camp Adair was eventually converted into an Air Force Station. The Adair Air Force Station was in existence from about 1957 to 1969. The AAFS was home to the regional SAGE Support Facility, a Cold War radar defense system. At one point, there were plans to site BOMARC missiles in the area that is now part of the US Forest Service, just north of Camp Adair Road.

After the Air Force Station closed, all of its land and buildings were either deeded or sold to other groups. They now form the nucleus of the modern day City of Adair Village. The original residences, which consist of houses on Willamette, Laurel, Columbia, and Azalea Streets were then used as Officers’ Housing for the Adair Air Force Station. In addition, the Air Force Station occupied buildings currently used by Santiam Christian School, Valley Catering, the Oregon Department of Fish and Wildlife, and the Block Building.

The City of Adair Village was platted in 1973 and incorporated by election in May of 1976. The Officers’ Housing used by the Air Force was in the area platted to become Adair Meadows, but a clerical error on the documents changed the name to Adair Village. The originating founders decided to stay with the Adair Village name rather than start the process over again.